After a holiday hiatus, the Penguins Podcast is back this week with Anthony Peters swinging by. Obie and Nick have a great conversation with Anthony as they learn about the goaltender's battle back from a car accident that left him bed-ridden for two months; the dynamic between two brothers who are both goalies and his favorite father-son moment.

With three games in the next four nights, Mike O'Brien and Nick Hart serve up the appetizer for your Thanksgiving feast with this edition of the TWO-MAN ADVANTAGE.

Fresh back from his trip to the Karjala Tournament in Finland, a tired and jet-lagged Christian Thomas gutted out a podcast appearance with Obie and Nick. They get in depth on alien abduction, top 3 arena appearances and skating on either side of the WBS/Hershey rivalry.

Nick and Obie also take stock of the Penguins as the team extends its point streak to 10 games.

Mike O'Brien and Nick Hart take a quick look back at Wednesday night's win over the Toronto Marlies, and a look ahead to this weekend's action, in another edition of the TWO-MAN ADVANTAGE.

Great podcast this week as veteran defenseman Chris Summers swings by to talk with Obie and Nick. They discuss the make-up of the Penguins blueline, living the Ann Arbor dream and hiding Halloween candy from the kids. Chris also doles out his best broadcast voice sign-off.

Obie and Nick take a look back at recent #WBSPens action, and look ahead to our midweek opponent – the Toronto Marlies – in this edition of the TWO-MAN ADVANTAGE.

A Year in the Life: Josh Archibald

When Mike Sullivan went out of his way to bestow the moniker of “Buzzsaw” upon Josh Archibald, one could correctly surmise that the head coach, then of the Wilkes-Barre/Scranton Penguins, was a fan of the forward’s style of play.

When Sullivan ascended to become the head coach of the Pittsburgh Penguins, one might have also assumed that an NHL call-up would soon follow for Archibald.

But Archibald was not part of the group elevated from Wilkes-Barre/Scranton soon after Sullivan took over in Pittsburgh.  The 2011 6th-round pick instead was forced to watch as teammates, such as Conor Sheary and Scott Wilson, found permanent homes in the NHL and eventually lifted the Stanley Cup.

But patience paid off for Archibald.

END_OF_DOCUMENT_TOKEN_TO_BE_REPLACED

A Dynamic Duo on Defense

That was the total number of defenseman taken by the Pittsburgh Penguins during the 2014 and 2015 NHL Entry Drafts.

The dearth of blueliners selected was the consequence of several factors: the Penguins had traded away a number of picks in trades which helped the Penguins win back-to-back Stanley Cups; following the formula of opting for the best player available when Pittsburgh was on the draft clock; and perhaps a slight organizational philosophical lean to help build up the forward prospect pipeline.

In recent drafts, the Penguins have since shifted their focus to the backline once again, with eight defensemen chosen over the last two drafts.

That one selection though – taken with pick number 203 in the seventh round of the 2014 draft – looks ready to make an impact on the Penguins starting this season.

END_OF_DOCUMENT_TOKEN_TO_BE_REPLACED

Ask any professional hockey player who has had the most influence on his playing career, and 99 times out of 100 the answer is: “My parents.”

Almost every hockey player tells tales of mom and/or dad behind the wheel for all those drives to all those early morning practices or out-of-town tournaments, the hours upon hours spent in the stands, cheering on their sons and daughters.

With Father’s Day around the corner, it’s time to shine the spotlight on the patriarchs in these hockey players’ lives.  Here’s a look at Wilkes-Barre/Scranton Penguins players whose dads have also played in the pro ranks. 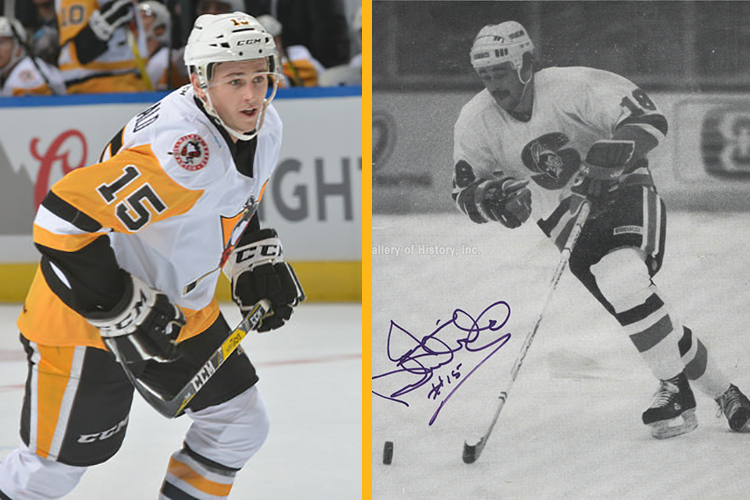 END_OF_DOCUMENT_TOKEN_TO_BE_REPLACED

Mike O'Brien and Nick Hart re-visit their favorite moments and stories from the a season's worth of podcasts. And they follow up on some unanswered questions like:
– Did Sahir Gill's coat ever make it from China?
– What ever became of Brett Stern's cat, Mr. Glenn?
– What's the other side of the story that resulted Cameron Gaunce having a plate thrown at his head by his brother, Brendan?

Mike O'Brien and Nick Hart sit down to diagnose the Penguins' exit from the playoffs, discuss their Top 3 Surprises and Top 3 Moments from the 2016-17 and hand out their end of season awards.

With a playoff spot clinched, defenseman Frank Corrado visited Mike O'Brien and Nick Hart on this week's Penguins Podcast. The trio talked about Frank's go-to song on the guitar, going viral and his run to the Calder Cup Final with the Utica Comets.

This week's guest on the Penguins Podcast with Mike O'Brien and Nick Hart was forward Adam Krause. He talked about the amazingly lopsided ratio of outdoor vs. indoor rinks in his hometown, being a number-one pick in the USHL and his canine-assisted proposal.

Mike O'Brien and Nick Hart were joined by Brett Stern on this week's podcast. Fascinating conversation with the second-year defenseman as he spoke about the 'Island of Misfit Toys', leaving a promising soccer career behind to pursue hockey and his cat, Mister Glenn.

The Penguins Podcast with Mike O'Brien and Nick Hart is back this week with guest Thomas DiPauli. The rookie forward speaks about his love for the outdoors, growing up in the German section of Italy and how a current teammate might have knocked out his two front teeth.

Nick Hart and I sit down Penguins forwards Sahir Gill and Pat McGrath in a friendly game of NHL 16 that pitted "Broadcasters vs. Players."

Spending an afternoon with Wilkes-Barre/Scranton Penguins forward Carter Rowney and defenseman Barry Goers as they head outside for some fun with their dogs, Louie and Bane

Wilkes-Barre/Scranton Penguins Players Brian Foster and Pat McGrath join me on Montage Mountain as we give snowtubing and airboarding a try.